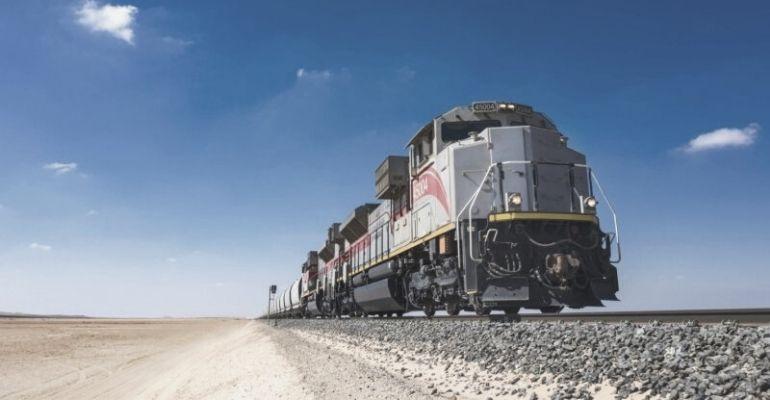 Part of the second stage of the Etihad Rail project, previously valued at over AED 1 billion, has been completed ahead of schedule.

Construction works for Package A of Stage Two of the UAE’s Etihad Rail project has been completed, the report said. Work on a connection through the town of Al Ghuwaifat, at the border of Saudi Arabia, has also been completed.

Package A of Stage Two extends over 139 kilometres, while the Al Ghuwaifat connection extends for 264 kilometres, from Habshan to Ruwais areas.

Stage Two is broken down into a total of four packages, with Package A extending from Ruwais to Al Ghuwaifat. As of 2019, Package A was valued at AED 1.5 billion.

Meanwhile, 40% of the network’s annual transport capacity has also been reserved. On completion of Stage Two, this will come up to 60 million tons of goods per year. Reservations were made through commercial contracts, including those with quarrying company Stevin Rock, Western Bainoona Group, and Al Ghurair Iron and Steel (AGIS).

Etihad Rail is one of the UAE's largest infrastructure projects. It will connect all seven emirates of the country via a 1200 kilometre-long track.

ETIHAD RAIL WAS ESTABLISHED IN 2009

The rail project is managed by Etihad Rail. The company was established in June 2009 to develop, construct and operate a national freight and passenger railway network in the UAE.

The project is aimed at connecting trade, industry, manufacturing, production, logistics, and import and export hubs, as well as the population in the UAE. It will also be part of the GCC railway network.

Stage Two of the Etihad rail project will extend from Al Ghuwaifat to Fujairah. It will connect Abu Dhabi, Khalifa Industrial Zone, Khalifa Port, Jebel Ali Port, Dubai, Sharjah, Ras Al Khaimah and Fujairah. Stage Two is fully funded, agreements have been signed with ports and industrial complexes, and Design and Build contracts have also been awarded for packages from Al Ghuwaifat to Fujairah.

Stage One, meanwhile, has been operational since January 2016. It facilitates the transportation of 22,000 tonnes of granulated sulphur for ADNOC on a daily basis, from Habshan and Shah to Ruwais. Stages One and Two coincide at the cities Ruwais, Mirfa and Tarif in Abu Dhabi.

Etihad Rail also has plans to expand in the future, including stops at Al Ain and Saqr Port.