Hybrid work model continues to be the office of the future 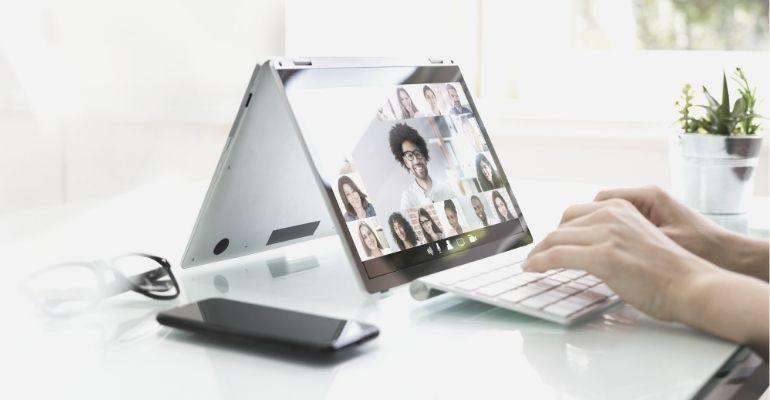 This month, the office rental company and rival of WeWork, IWG revealed plans to add more than 1000 new locations globally in 2022.

With a particular focus on suburban areas, IWG, has stated that the demand for the hybrid work model continues to dominate the post-pandemic environment and trends in the market indicate that office landlords are opting for a hybrid and flexible office approach to the office across global cities.

IWG which owns Spaces and the Regus brands has around 3500 buildings in more than 120 countries and according to a recent report, counts 83% of the Fortune 500 firms among its worldwide customer base.

THE HYBRID OFFICE IS HERE TO STAY

Speaking at the global property conference MIPIM earlier this month, CEO, Mark Dixon said that the shift to hybrid is irreversible and IWG will continue to expand over the next year.

“Companies are also benefiting from significant falls in their real estate costs, along with tangible productivity gains and an increased ability to attract the best talent no matter where they are located. Hybrid working is no longer a nice to have: more than 70% of candidates are now insisting that companies have a flexible work policy, said Dixon in IWG’s recently published whitepaper, Future of Work: A Trends Forecast for 2022.

Firms have also come to realise that they no longer need a sea of desks in a single, expensive city-centre location. Instead, they are reconfiguring their office footprint, bringing offices closer to their people and adopting the hub-and-spoke model,” said Dixon.

With the concept of the office having changed so drastically over the last two years, IWG forecasts that 2022 could further cement changes for the office sector. Their predictions for the year:

THE OFFICE AND EMPLOYEE WELLBEING

“With this in mind, the hybrid model naturally aligns with better mental health because people are less frequently forced to compromise their own needs for those of the company’s. We have already seen employers such as Nike, Bumble, KPMG, The New York Times and LinkedIn giving staff impromptu ‘pop-up’ paid leave to reboot or spend some time on a passion project in a bid to avoid mass burnout. According to the American Institute of Stress, companies in the US lose USD $300bn per year as a result of absenteeism, so things really need to change,” according to IWG’s whitepaper. 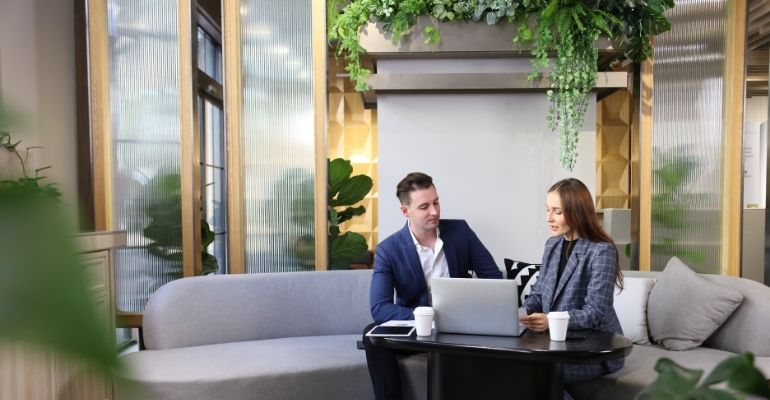 According to an IWG survey last year, almost half of all office workers would quit if asked to go back to the office five days a week, while three quarters admitted they would prefer the option of hybrid working to a 10% pay rise, if offered. Post-pandemic companies are realising the benefits of having staff opt for a more blended and flexible approach to work.

WORK FROM ANYWHERE: THE RISE OF THE FLEXSPACE HUBS

According to IWG, greater possibilities are opening up for employees despite location and long-distance commutes.

“For example, a company in California could hire someone living in London to do a job that previously would have needed them to relocate to San Francisco. In the hybrid world, they can simply check in via Zoom from a coworking site in Mayfair and visit the transatlantic head office two or three times a year,” reads the whitepaper.

IWG notes that this workforce dispersion is also happening within borders, too as employers and employees see that there is the ability to work from anywhere and retain a better work-life balance.

OFFICE REDESIGN: OFFICE OF THE FUTURE

“Many experts believe they will become social hubs, suggesting we could see the integration of bars, wellness spaces, expansive communal tables and residential-style lounges. Spaces will be adapted to enhance creativity, relationship building and face-to-face communication between professionals, while the hybrid working model will allow workers to use these new facilities in ways that best fit their own lifestyles and working needs,” reveals the IWG whitepaper.

IWG notes that the traditional form of cubicles is out and instead in 2022, workspace providers will be delivering hubs that exhibit everything from biophilic design, hot desks, video-conferencing suites, and social spaces. 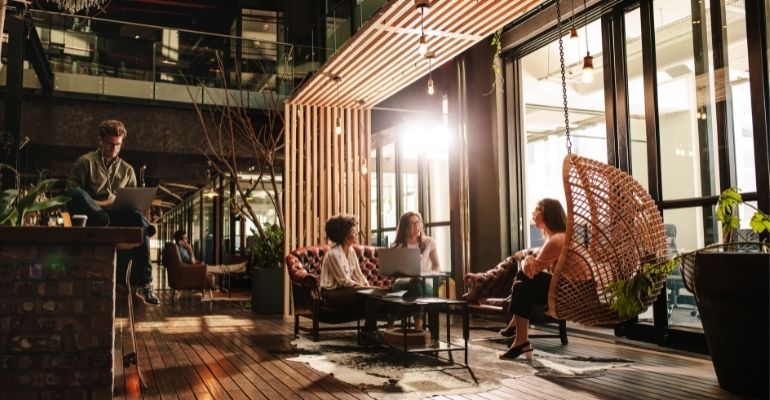 THE RISE OF TECHNOLOGY IN THE OFFICE

Embracing the smart city concept, offices will begin to rely heavily on technology. From facial recognition to ease virus control and the reliance on apps to book desks.

“For many companies, cutting-edge experience design will be used to boost motivation, creativity and a sense of culture. Even fun will have an important part to play – just think of tech giants such as Google, which, even pre-pandemic, had Lego zones, slides and bowling alleys built in. Access to green space will also become a major boon, suggesting that major companies could invest in surrounding parks and gardens for employees,” states IWG.

With the rise of hybrid working and the hybrid worker, the sustainable benefits for cities and offices have been immense. According to IWG, as many companies downsize city-centre offices and incorporate flexible space into their real estate portfolio, hybrid working will also reduce corporate energy consumption.

“But cleaner air is not the only sustainability benefit that comes from hybrid working. In fact, it can play a major role in supporting a number of the United Nations’ 17 Sustainable Development Goals for 2030, allowing businesses to easily achieve substantial green dividends in areas such as sustainable cities and communities, clean energy and climate action, gender equality, and good health and wellbeing,” reads the IWG report.