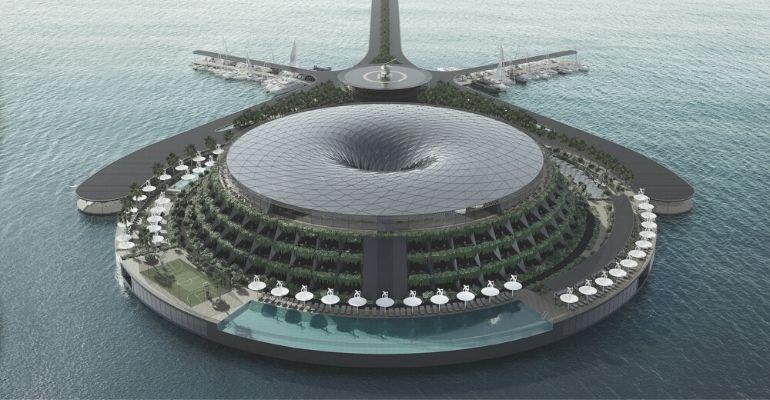 The eco luxury floating hotel is powered by a combination of wind, solar and hydro-generated energy, and is fitted with a rainwater harvesting system.

A concept for a spinning eco luxury floating hotel by Hayri Atak Architectural Design Studio (HAADS) has been grabbing eyeballs.

The concept for the 35,000 square meter-wide spinning hotel along Qatar’s coast is based on reducing waste and energy loss. When completed, the floating hotel will be able to generate electricity, and reuse rainwater and food waste collected at the hotel.

HAADS has worked with a number of vendors, including ship construction engineers and architects, to design the eco luxury hotel. Announced in March last year, the project is expected to be completed by 2025.

The eco luxury floating hotel has 152 suites that come with private balconies, a 700-square-metre lobby, and will also feature indoor and outdoor pools (including infinity pools), a rooftop bar, a spa, and a gym, as well as a basketball court and a mini golf course.

The uber-luxurious floating hotel is connected to the mainland by a 140-degree floating pier, also accessible by helicopter or boat. The pier leads to three points of entry across one half of the hotel. 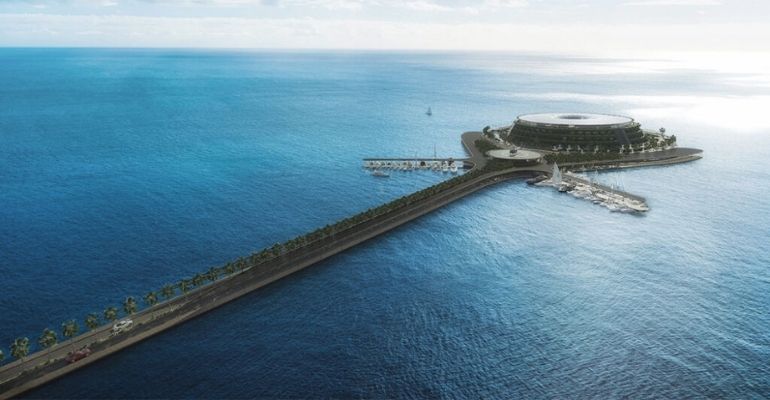 PUTTING THE "CEO" IN ECO LUXURY AT QATAR'S FLOATING HOTEL

The hotel acts like a giant rotating hydro-generator. The ecoluxury property will be powered by a structure similar to a dynamo. Turbines will use water current to harness tidal power to generate electricity.

The movement of the floating hotel will be controlled by dynamic positioning, a computer-based system that can help to maintain the position and direction of propellers and thrusters, which are fitted below the waterline.

A full 360 degree spin will take about 24 hours, so visitors are less likely to feel the rotation. Further, the entire hotel is movable, and can be relocated.

The circular-shaped floating hotel has a vortex-shaped roof designed for sustainability. The roof is purposed for rainwater harvesting, and also fitted with solar panels. At the centre of the roof is a funnel-like structure that, in addition to forming the centrepiece for the hotel’s lobby, also funnels rainwater for collection.

The periphery of the eco luxury floating hotel is dotted with 55 wind turbines as well. Further, the ecoluxury project also features a wastewater treatment site, as well as a system to convert food waste into fertiliser, to be used in the green spaces around the floating hotel.

As of April this year, HAADS has been in the process of undertaking feasibility and technical tests for the eco luxury project.