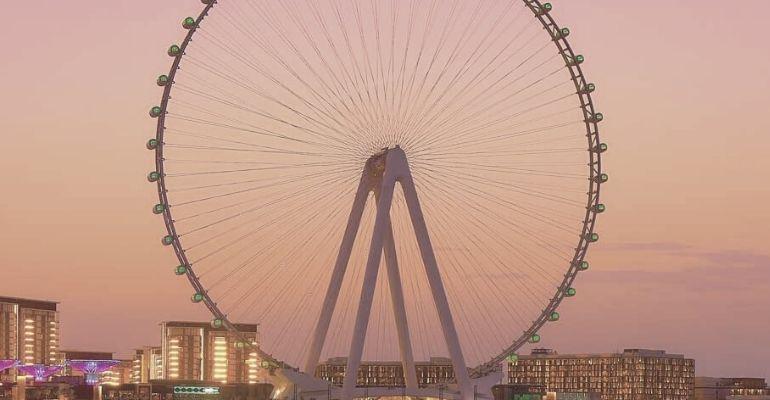 Ain Dubai is the world’s largest and tallest observation wheel, and the latest attraction to emerge from Dubai’s tourism sector.

Ain Dubai, the world's largest and tallest observation wheel, opened to the public this week. Tickets for the day of the launch were completely sold out, according to The National.

Ain Dubai is owned by Dubai Holding under its entertainment portfolio and is located on the Bluewaters Island in Dubai. The 250-meter-high wheel has a total of 48 rotating cabins, each with a capacity of 40 passengers. However, the passenger limit per cabin is currently set at 10 to 12 per cabin due to safety considerations.

Visitors can choose from Observation Cabins, Social Cabins and Private Cabins, and can also access customisable experiences at the tourist attraction.

The observation wheel opened with an inaugural rotation that took 38 minutes. Guests included those that had pre-booked the experiences, as well as winners of the Ain Dubai treasure hunt around Bluewaters competition.

"It was a proud moment for us to host such a celebration to officially welcome the world, allowing so many visitors the chance to experience much of what Ain Dubai has to offer,” Ronald Drake, General Manager of Ain Dubai said in the statement.

Plans for Ain Dubai were approved in 2013

Ain Dubai displaces the Las Vegas High Roller to become the world’s tallest observation wheel in the world. The High Roller has a height of 167.6 metres. Ain Dubai is also nearly twice the height of the London Eye, which stands 135 metres tall.

Plans for the wheel were approved in 2013 as part of the USD 1.6 billion Bluewaters Island development project. The London Eye served as its inspiration, and the wheel was originally estimated to cost AED 1 billion, with a height of 210 metres.

Meraas Holding won the contract to develop the Bluewaters project, including the wheel. Last year, it was announced that Dubai Holding would fully acquire Meraas.

Meanwhile, Hyundai Contracting and Starneth Engineering were appointed as primary contractors for Ain Dubai (they also helped to build the London Eye).

The observation wheel was scheduled to open last year, to coincide with the launch of Expo 2020.

Similar to Expo 2020, Ain Dubai is an addition to a growing number of efforts in the UAE to boost the competitiveness of its tourism sector in the post-COVID era.

According to a recent report, the country leads in terms of tourism FDI projects in the MEA region, accounting for a third of all tourism FDI investments as well as tourism capital investment.