Gulf real estate woes: Not just a question of supply 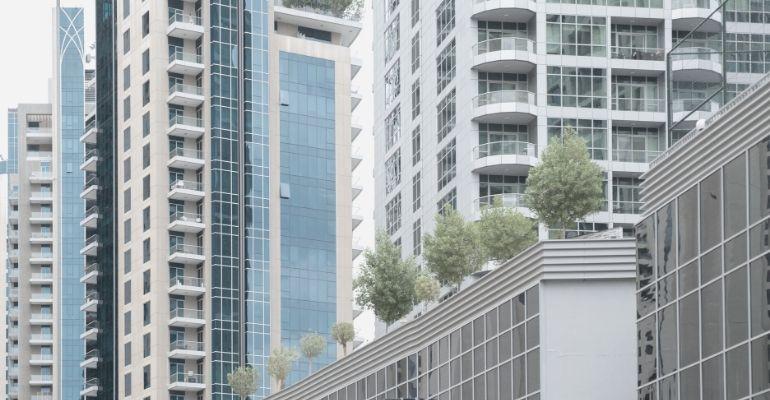 It’s no secret that real estate prices have fallen by around 30% on average across the Gulf in the past four to five years. Whether residential or commercial in nature, there has been a noticeable lack of safe haven assets.

Strangely though, in much of the market commentary there has been distinct lack of attention to the fundamentals explaining recent price declines. Or, to be more exact, analysis has been very one-sided, focusing almost exclusively on the problem of excess supply, when in reality, insufficient demand has been the primary problem.

To be clear, when market prices fall, it is entirely accurate to say either that there is insufficient demand or excess supply: they are, in effect, two sides of the same coin. But what needs to be explained and, frankly, hasn’t been properly understood in the Gulf (and especially in the UAE), is that it is primarily weaker demand that has led to lower prices. For sure, the situation has been exacerbated by supply additions, but ‘overbuilding’ is not the major problem.

Why is it a demand problem?

Take a look at the chart below relating to the UAE (Abu Dhabi and Dubai). You’ll see two lines showing data from 2006 to 2018: one of those lines represents annual inflation-adjusted (known as ‘real’) gross domestic product (GDP) growth of the UAE economy excluding oil and gas production; the other line, annual changes in real estate prices. 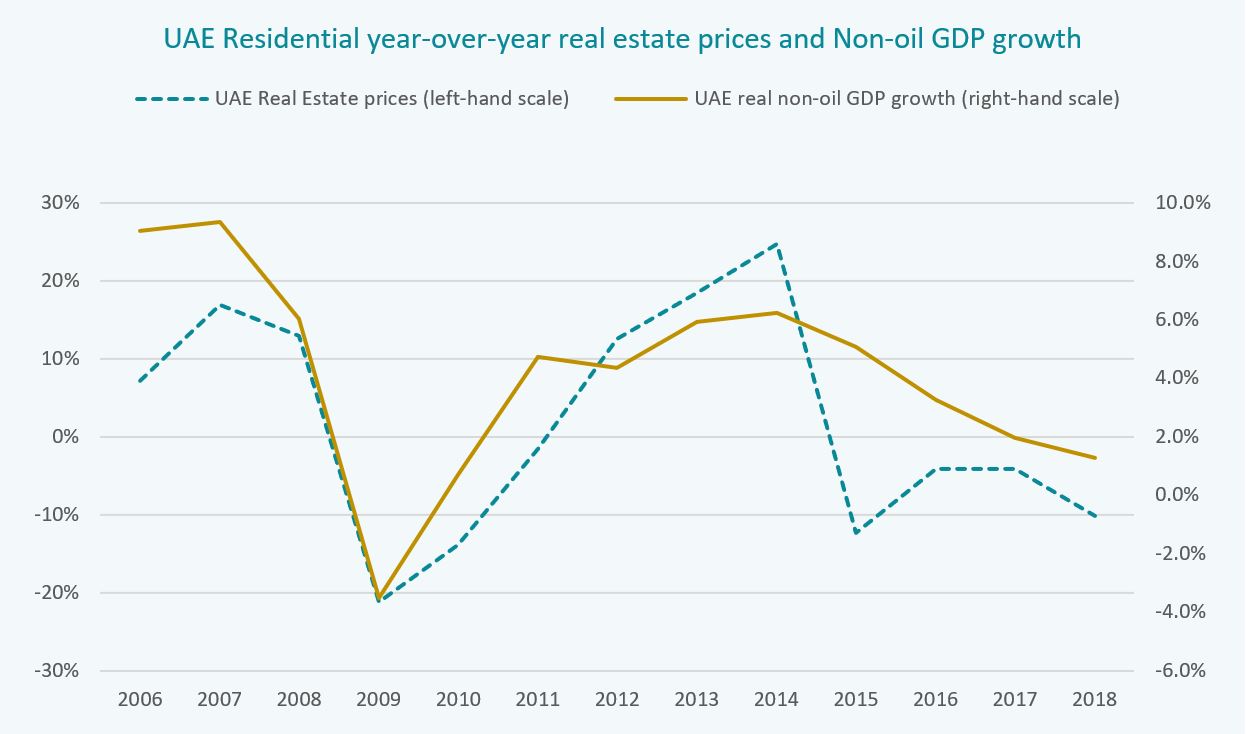 No doubt, you’ll also have noticed that the two lines are highly correlated (to be exact, there is an 80% correlation). There are a couple of important reason why. Firstly, non-oil GDP growth is effectively a proxy for household and business income growth. When the rate of income growth falls, households, quite rationally, make downward adjustments to their spending decisions. In the context of a house purchase, they are likely to be less confident about borrowing, and, given reduced expectations about future income, likely to want to spend less.

Secondly, however, and more importantly in the Gulf, a slowdown in economic growth not only means lay-offs, but also people leaving the country as a result of being laid off. In Abu Dhabi, for instance, according to official data, the population in Abu Dhabi shrank by 3.6% in 2018 alone. Put simply, this reflects a lot of demand for housing leaving the country. No wonder prices have fallen!

All the same, for those who look around and see new construction projects everywhere and still believe the market is weak due to overbuilding, we would point to transaction volume data published by Dubai Land Department which shows a steep downward trend. Total transactions of villas and apartments (off-plan and existing), for instance, were 43% lower in 2018 than in 2013.

This data flies in the face of the over-building narrative. After all, when the price falls of a good we like, we tend to buy more of it. In other words, if we believe anything at all about micro-economics, if our preferences (i.e. demand) had remained the same, according to the over-building hypothesis, transaction volume would have increased. The fact that the reverse is the case, that transaction volume has fallen, is proof that lower demand was a more important driver of prices than overbuilding.

Of course, this does not mean that over-building hasn’t exacerbated the downturn; but it needs to be remembered that many of the building projects were planned precisely at a time when the domestic economy was growing strongly. They were, at least partly, based on demand estimates that failed to materialize precisely because the GDP growth rates slowed so markedly.

What is driving slower domestic demand?

In short, fiscal controls imposed by Governments in order to address the deficits that arose after oil prices fell. The two charts below tell the whole story. 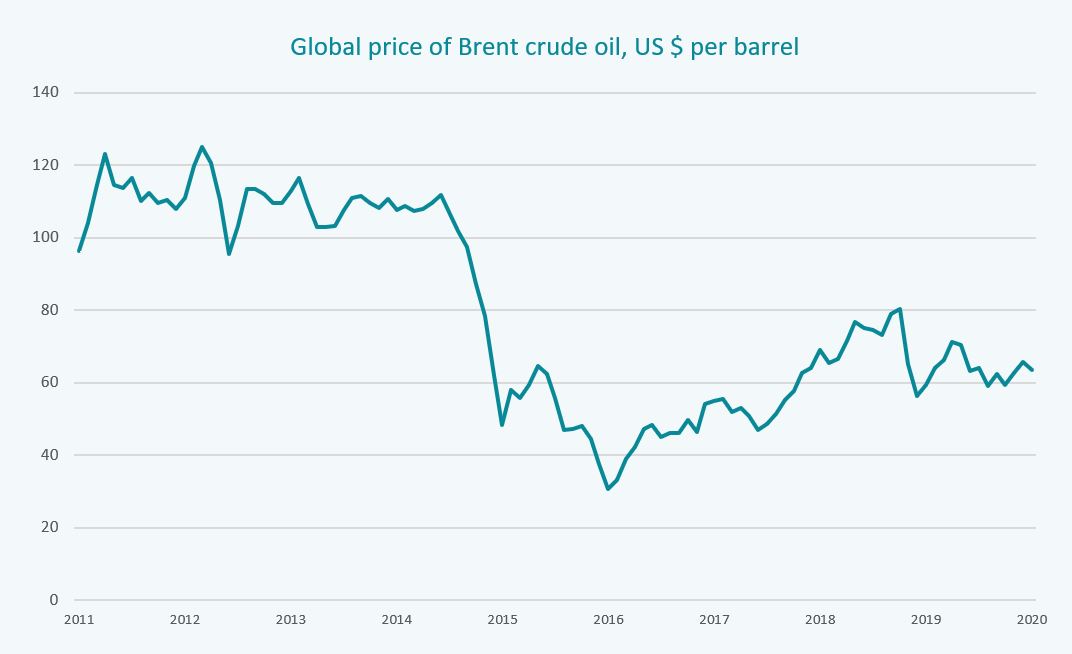 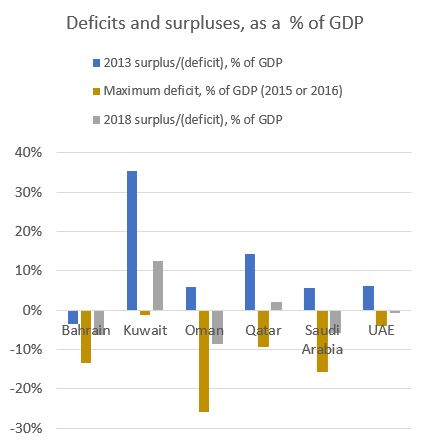 Between 2011 and mid-2014, oil prices were very high and, as a result, GCC countries were able to rely on oil and gas revenues to fund, on average, 90% of government spending. At the same time, excepting Bahrain, all the countries ran healthy budget surpluses – Saudi Arabia and UAE, as the chart shows, posted surpluses to the tune of 6% of GDP.

But each government’s reliance on oil and gas came at a price; for as the oil price fell, those large and healthy surpluses turned to deficits: Saudi Arabia’s deficit in 2015 was around 15% of GDP. In other words, Saudi experienced a negative 21% percentage point swing in their fiscal position. To put this in perspective, the UK government finances saw a negative swing of 7.5 percentage points after the global financial crisis.

Budget deficits of over 10% of GDP, let alone 20%-plus, are unsustainable, and no responsible government can ignore them. The case of Saudi Arabia provides a good example of why not, and why the Saudi government responded in the fashion it did, i.e. with sweeping fiscal control and Vision 2030. Coming into 2014, the Kingdom had very little public debt; total sovereign debt in 2013 was only 3% of GDP. Yet, from 2015 through 2018, the Saudi Government needed to fund over 1.2 trillion Riyals (or U.S.$ 320 billion) of cumulative deficit. Rather than just printing the cash (the route taken in countries like Venezuela, where successive governments seem content to stoke hyperinflation, and rapidly destroy savings), the government drew down its savings and issued dollar-denominated debt; in a ratio of roughly 60% deposit draw-down to 40% debt issuance.

Since these peak deficits, we have seen determined efforts to lower the deficits. The chart above, for instance, shows the deficit as a % of GDP for each GCC country in 2018; and, in all cases, there is a marked improvement. While around one third of the improvement has, on average, come from higher oil prices, two-thirds has come from raising government fees and taxes and from cutting spending. This very real fiscal control, while entirely necessary, has taken its toll on the domestic economies of the Gulf.

What next for Gulf real estate?

While we will answer this question in full a future article, for now, it’s important to bear in mind that if it was weak demand that led the market down, and that weaker demand was a result of fiscal measures, any upturn is likely to be dependent on governments spending more. While we expect less austerity in the coming few years, we do not expect the fiscal taps to be open. GCC countries know that their long-term health is more important than any short-term gains in the property market.

In a recent webinar, Dr Chris Payne, Chief Economist at Peninsula Research and Simon Townsend, Head of Valuations and Consultancy at CBRE  debate and discuss trickle-down topics such as economic impact ripples caused by the pandemic. Find out more by watching the on-demand recording.