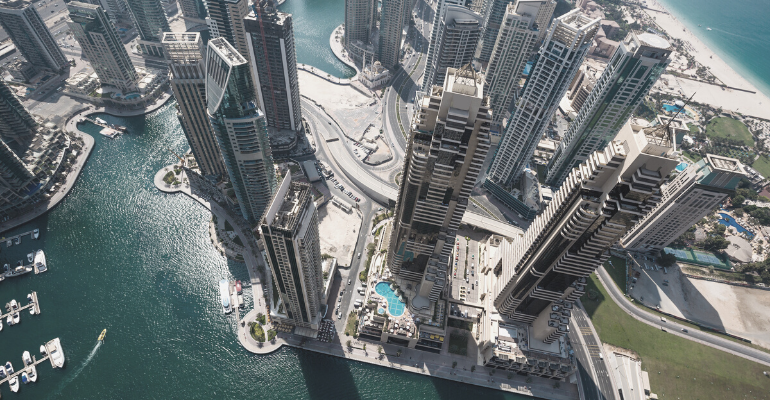 Arguably, no city has seen such a rapid transformation as Dubai. The speed of growth and expansion in the built environment has brought challenges; property market cycles are certainly more volatile than in other more established cities.

However, every cycle helps create a more mature investment environment. The opportunities arising from this growth are immense. The task of accommodating a 71% population growth over a decade opens huge investment prospects across residential, industrial, retail, offices and leisure, investments in all these sectors has seen exponential growth over the last decade. Dubai has emerged as a critical global gateway city. Its geographic position means it is uniquely well placed to act as a hub for accessing Asia, the Middle East and Africa – all key future economic growth centres. Within a four-hour flight time, Dubai is able to access 10 leading global cities, including Riyadh and Delhi or a third of the world’s population. A further 24 key cities, including London, Singapore and Frankfurt, are located within eight hours’ flight time or two thirds of the world’s population.

This has resulted in a plethora of nationalities choosing the Emirate as a location for a second home or investment purchase, in the first nine months of 2018 alone we have seen over 142 nationalities invest in Dubai’s market with the top 10 foreign investors hailing from countries such as India, the United Kingdom, Pakistan and China.

This is despite Dubai’s residential market having experienced headwinds in recent years, driven by lower oil prices, global economic uncertainty, the stronger US dollar (which has fed through to the dollar-pegged dirham) and the introduction of stringent mortgage regulations. Despite the recent slowing in market performance, if we take a longer-term view, the emirate has experienced stable growth.

Despite this long-term performance, Dubai remains relatively affordable on a global basis. Knight Frank has analysed the amount of prime residential property that US$1M will buy in key cities around the world, with Monaco offering 16 square metres, followed by Hong Kong at 22, London at 31 and New York at 31 square metres. For the same budget, Dubai offers a generous 143 square metres of prime property.

This relative affordability is not an indication of a lack of prime schemes. In fact, there are a number of schemes where the quality matches or in some cases, surpasses what is found in the aforementioned key global cities. Knight Frank has seen strong demand for properties in this segment of the market, with the benefit that in Dubai, buyers are able to acquire these prime projects at values that are relatively lower, compared to other key global cities, whilst still benefitting from Dubai’s business and lifestyle offer.

More so, many key global residential markets have experienced rapid reform of property taxation over recent years, with additional purchase taxes and levies directed at foreign buyers. Dubai has no such additional levies and operates as an income and capital tax-free system, encouraging buyers from an increasingly diverse range of countries. This combined with healthy yields in the range of 6-7% on average in the residential market is continuing to attract a range of investors from across the world.

Then it is not surprising that we are observing investors acquiring Dubai residential assets as part of their portfolio, alongside their pied-à-terre in New York, a home in London for their children’s education or a second home in the south of France.