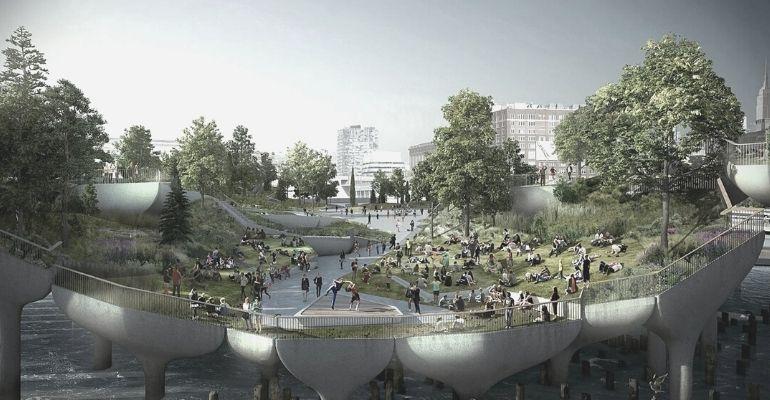 British designer Thomas Heatherwick’s Heatherwick Studio provided designs for the park, which was built in partnership with landscape architecture firm MNLA (Signe Nielsen provided the landscape design) and engineering company Arup. Overall, over 16 construction, engineering, and design teams were involved in the making of Little Island.

Plans for the park were off in 2017 after legal issues popped up. Eventually, city governor Andrew Cuomo stepped in to get the project back on track.

Little Island is a historical location, cultural venue and public park rolled into one. The island park has been built on the remnants of Pier 54, memorable for being the point of arrival for survivors of the sunk Titanic in 1912.

The Diller – von Furstenberg Family Foundation has committed an additional $120 million to Little Island over the next decade for maintenance and theatrical productions.

THE MANY FACETS OF LITTLE ISLAND

Two broad bridges extending from the Hudson waterfront in Meatpacking District lead to the 2.7 acre-wide undulating quadrangle. The supporting structure is made of 267 precast concrete piles, wedged deep into the riverbed, between leftover wood piles from Pier 54 and Pier 56. The piles were fabricated off site and transported on barges to the Hudson River.

Of the total 267 piles, 132 support the tulip petal-shaped concrete ‘pots', each of which comprises 4-6 concrete petals. No two pots are the same, and each weighs about 75 tons. Steel plates connect the pots together, in which one can find soil, lawns, overlooks, and trees.

The island’s 3D topography is home to over 350 species of flowers, trees and shrubs, a 687-seat amphitheater, a central plaza called the Playground, and a stage and lawn space. Over 66,000 bulbs and 114 trees have been at Little Island so far. Plantings are varied to allow seasonal changes to reflect in the park’s green landscapes. 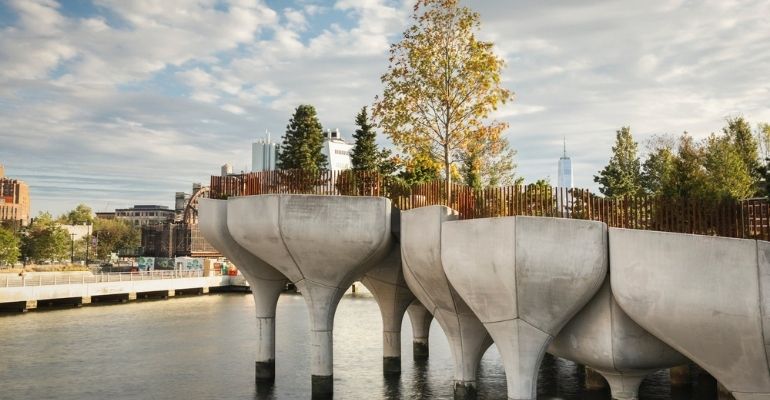