The role of the cultural economy in the UAE 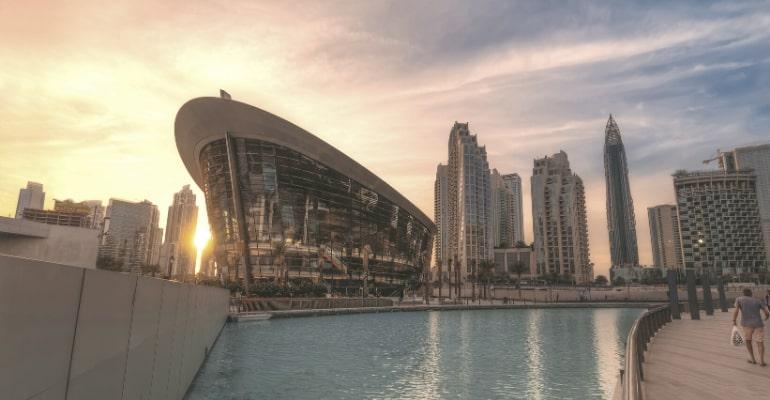 With the UAE’s transition from an oil-based economy to a knowledge-based one, the emphasis for the country over the next few years will be to enhance its cultural offering.

Realising the crucial role the design industry plays in economic development, governments across the region are calling for investment into industries which provide a higher degree of economic value-add and which can provide long-term sustainable growth prospects.
In 2014, the Dubai Design & Fashion Council (DDFC) was established to provide the legislative framework for this fast-growing industry and platforms to nurture and support emerging local talent, and also, Dubai Design District (d3) was launched as the region’s only purpose-built creative community to foster growth of the design industry and cater to its industry-specific needs.
According to the inaugural MENA Design Outlook released by the DDFC, MENA’s design industry is a fast-growing market, gradually transitioning from importer and consumer of design to creator and exporter of design-driven products and services.
Furthermore, MENA’s design industry is on the rise and has grown over the past few years at twice the rate of the global industry, the DDFC claims, with a similar growth pattern expected over the next years.
The development of the regional design industry is undeniably in line with the strategy of countries and governments to transition towards knowledge-based economies where creativity and innovation are incentivised. The design sector is also an important source of job creation and entrepreneurship for the large regional youth community, says the DDFC.

Architecture & design
In the Middle East, “creative industries have played a prominent role in the cultural and economic development of the region for centuries, renowned for its unique aesthetic in art, calligraphy, music, poetry and literature, Arabic style architecture, woodworking and a range of crafts and jewellery,” states the DDFC MENA Design Outlook.
Today, the UAE’s creative industry thrives in part on innovative architecture, including on creating world class cultural projects. In the UAE, some of the most prominent examples of this include the Saadiyat Cultural District including the Louvre in Abu Dhabi, and the Dubai Opera.

Saadiyat Island Cultural District
Saadiyat Island's Cultural District plans to house the largest single cluster of world-class cultural assets. In addition to the Louvre Abu Dhabi, TDIC’s portfolio of cultural projects includes the Zayed National Museum and Guggenheim Abu Dhabi, both designed by Pritzker Prize winning architects. “They will be situated adjacent to Louvre Abu Dhabi in the Saadiyat Cultural District, which once fully developed will turn Saadiyat into a beacon for the arts,” says Moza Al Qumzi, Development Manager for Museums, TDIC.
According to Al Qumzi, the presence of major cultural projects is an important aspect of any country and it is very important to the UAE today and part of its vision for the future. “In addition to attracting artists and those who appreciate art in all its forms, museums and similar institutions offer the UAE a platform to highlight its rich heritage while also relating its relationship to cultures from around the world,” Al Qumzi says.

The Louvre Abu Dhabi
More than just a museum, Louvre Abu Dhabi is set to be an iconic landmark that “will help elevate the emirate’s current standing within the art world, by offering a platform that not only showcases a rich collection and infinite opportunities for dialogue, but also houses them in a structure that is the first-of-its-kind in the region and internationally, says Al Qumzi.
The striking and innovative building was designed by Pritzker Prize-winning architect Jean Nouvel. Hala Wardé, Project Director at Ateliers Jean Nouvel (AJN) explains that Jean Nouvel has sought inspiration for the concept of Louvre Abu Dhabi in traditional Arab architectural culture.
“Applying a contextual approach to the site, the Louvre Abu Dhabi has been designed as a ‘museum city’ in the sea, with its contrasting series of white buildings inspired by the medina and low-lying Arab settlements. The dome covers the majority of the museum city and becomes an iconic structure visible from the sea, the surrounding areas and Abu Dhabi city,” Wardé says.

The rain of light
The dome’s seemingly random but carefully designed arrangement of geometric openings was inspired by the interlaced palm leaves traditionally used as roofing material. The apertures will make it possible to control the light and temperature inside. The interior will be illuminated by an enchanting, shifting ‘rain of light’, reminiscent of mashrabiya and the beams of light that illuminate souks.
“The dome’s complex pattern is the result of a highly studied geometric design, repeated at various sizes and angles in the eight superimposed layers. Each ray of light must penetrate the eight layers before appearing then disappearing, creating a cinematic effect as the sun’s path progresses throughout the day. Named the ‘rain of light’, this effect has been the subject of many models and mock-ups over the years and is one of the defining features of the concept,” Wardé explains.
Hala Wardé admits that constructing the dome was a great challenge due to the design, engineering and logistical aspects to its installation. It is composed of four stainless steel outer layers and four aluminium inner layers of cladding separated by a steel structure five meters in height. Altogether the dome weighs 7,500 tonnes. The structure is composed of 85 super-sized elements whilst the eight layers of cladding are made up of 7,850 ‘stars’. “The installation of the dome took approximately two years to complete and whilst the construction was ongoing overhead there was simultaneously the construction of the buildings taking place below. This was the greatest challenge, conducting the sequence of works on two levels – the dome and below,” says Wardé, adding that now that the dome has been completed it has already become an iconic marker on Abu Dhabi’s skyline in advance of the museum’s opening.

A palatial character
Underneath the dome, the outer volumes of the museum, with their simple geometric forms haphazardly arranged, recall the Arab city and its medina. A promenade passes through clusters of low-rise buildings with diverse facades, creating a shifting, varied, poetic experience for visitors. In contrast, inside the buildings, the sequence of large galleries, with their strict geometry and high ceilings, offer exceptional spaces for the displays of works.
“The two priorities of the museum galleries are flexibility of space and the palatial dimensions of the galleries which has always been a key concern for Jean Nouvel. As Jean Nouvel describes it, the museum galleries have been designed to re-enforce the palatial character of this exceptional space. The walls are high and provide large unobstructed areas for maximum gallery flexibility. The raised floor is covered with bespoke ‘stone carpets’ framed in bronze. The glass ceilings have been designed to be both adaptable and modular so that they can evolve in harmony with the evolution of the museum’s permanent collection. Superposing the layers of glass permits a grid system that prioritises flexibility for the zenital lighting and equipment whilst creating a magisterial character for the museum galleries. The galleries will be calm, noble spaces directly linked to the architectural expression of the Louvre Abu Dhabi,” Wardé says.

Dubai Opera
Meanwhile in Dubai, the construction of the Dubai Opera has made international headlines. Billed as Dubai’s new cultural icon, Dubai Opera is a 2,000 seat multi-format venue for opera, theatre, concerts, art exhibitions, film, and many more, right in the heart of Downtown Dubai.
Designed by Atkins, Dubai Opera will feature state-of-the-art audio-visual technology and support systems to ensure an unrivalled events experience while the larger Dubai Opera District focuses on providing a unique public realm in which people can come together and enjoy life in the heart of Dubai.
Janus Rostock, Regional Design Director at Atkins Middle East says: “Dubai is a city built for cars which is reflected in its buildings; you won’t see many buildings that have intricate details on their facades as they are not designed to be on eye level with people on the street.”
However, the thinking is changing. With its design for the Opera District, Atkins aim was to bring life to Dubai’s famous Downtown area. This involved upgrading the facades on Mohammed Bin Rashid Boulevard with shops, cafes, and restaurants.
With the Opera itself Atkins created a building that sits in a public realm, surrounded by a plaza where people can walk and mingle. F&B concepts are to be found on the both sides of the plaza while the boulevard provides a multi-use outdoor space.
“It meant creating something that can complement the Dubai Mall which is the main attraction in the Downtown area. This is why we’ve introduced the plaza which creates a totally new experience in the area,” Rostock explains.

Inspired by the Dhow
The design inspiration for the Opera’s shape came from the traditional sailing vessels of the Arabian Gulf, the Dhow boat, which, as Rostock says, “functions as a cultural carrier that brought prosperity to Dubai.” The bow of the structure will contain the main stage, orchestra and seating areas, as well as the proposed sky garden and restaurants, while the elongated hull area will house waiting areas, taxi-drop off area, and parking.
The building has a striking façade which consists to 98 percent of glass. On the plaza side, it features a traditional mashrabiya pattern in order to protect the building from the sun as well as to hide the back of house facilities.
“Transparency is an important element in the visitor experience,” Rostock says, explaining that Atkins have used anti-reflective coding both on the inside as well as the outside so that people on the outside are able to look in and vice versa, “removing the inside/outside effect whereby the audience becomes the performer of the neighbourhood.”
Since the Opera is located amidst an upscale neighbourhood, the roof itself functions as a façade in order to hide all technical equipment etc., guaranteeing a pleasant view from the surrounding residential towers. Atop the roof is a restaurant with an outdoor courtyard and views over the Burj Khalifa.
Most theatres have a backside Rostock explains, but not the Dubai Opera. The 6 metre height level difference between the waterfront and the boulevard level means that all access to the Opera can be done underground and there is no need for a traditional backside.

The auditorium & interior
The main design uniqueness of the Opera however is its auditorium which has the ability to being converted into three different modes, all of which require different arrangements: Theatre mode, concert mode, and banquet mode.
In a theatre mode, spectators are arranged around the auditorium at an ascending angle, allowing optimum views from each seat. In a concert mode, the performers are placed in the same space as the audience while the banquet mode requires a complete flat floor. It’s the transition between the three modes that presented a unique challenge to the Atkins team; this is the first time ever that a structure of this type and size has been built in the world.
The water theme from the Dhow shape of the outside structure has been extended to the interior which is designed around a pearl-fishing theme. The entrance hall is adorned with a striking glass chandelier, mimicking the water theme, while the bathrooms have pearlescent finishes. Glass lifts covered in stainless steel mesh transport visitors to the upper floors providing panoramic view over Downtown.
Scheduled for completion later this year, the complex project involved over 100 architects from different Atkins offices around the world.