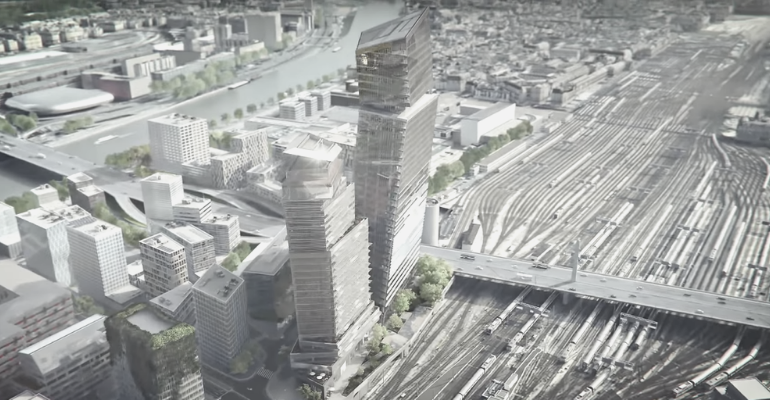 Canadian developer and sole investor Ivanhoé Cambridge have received approval from the City of Paris to go ahead with the twin towers project – named Tours DUO – that will replace a former industrial site with a mixed-use centre on the left bank of the Seine River. The design of Tours DUO comes from Pritzker Prize winner Jean Nouvel who is responsible for more than 200 projects worldwide.

The towers will include an 8-storey hotel, office space, retail, a top-floor restaurant and bar, gardens and green terraces, and enhanced access to the Seine itself. The towers are designed to lean to form a kind of V shape - some are already calling them the Leaning Towers of Paris - and rise 180 metres and 39 floors for DUO 1 and 122 metres and 27 floors for DUO 2. Both towers will be built for “exceptional energy performance” to acquire LEED® Platinum, HQE® and Effinergie+ certifications.

Nouvel won an international competition for the project in 2012. Local approval in the second half of 2015 suggests how long it can take to implement major projects in the world’s most famous cities. The towers are due to be completed in 2020.

The Tours DUO project is led by Ivanhoé Cambridge, real estate subsidiary of the Caisse de dépôt et placement du Québec, with Hines as the associate developer. “The issuance of the construction permit brings us into a new phase of this exciting project,” explains Meka Brunel, Executive Vice President, Europe, Ivanhoé Cambridge.

Located at the edge of the Seine, alongside railway tracks, the Tours DUO are intended to fill development goals for the area set by the city: Increasing the number of jobs available in eastern Paris, providing residents of the 13th district with renewed access to the Seine and creating a mixed neighbourhood with residences, offices, and shops. The project meets the challenge of letting Parisians take back a former industrial wasteland. It is similar in ambition to the River Point project in Chicago and the Bay Park Centre project in Toronto, both led by Ivanhoé Cambridge and Hines, and built over railway tracks.

Rooted in an optimistic approach toward the future and in Paris tradition, the sculptural Tours DUO is at the crossroads of two dynamics: that of Ivanhoé Cambridge in developing mixed-use complexes and large-scale projects in France since 1997, and that of a 21st century Parisian neighbourhood - Masséna-Bruneseau - which has the French capital’s lowest vacancy rate.

The future of workspace

In order to meet companies’ efforts in attracting top talent against a backdrop of competition between major European cities, these buildings of the future will offer latest-generation platforms. Smart, flexible and adapted to new forms of management and work (co-working, “fab lab,” etc.), their wide array of associated services (concierges, fitness, spas, etc.) will make them more than professional spaces and will turn them into 24-hour living spaces.

Also guaranteed to attract millennials is the resolution of traffic problems. Anyone who lives in or works at the Tours DUO will not have to rely on commuting by car. Well served by public transit, the Tours DUO will provide easy access to on-site bus connections, a nearby tram line, and eventually a métro and light rail station virtually at the doors.

The Tours DUO were conceived and designed based on a mixed-use principle. Beyond the 96,100 square metres of tertiary space are more than 12,000 square metres accessible to the public: the hotel, the restaurant-bar with a panoramic view over Paris, green space at ground level and on terraces, an auditorium, and a variety of stores.

Taking an active approach to sustainable development, Ivanhoé Cambridge systematically seeks to achieve high environmental standards in its projects worldwide. The Tours DUO project is the only high-rise project in France with WELL (WELL Building Standard®), a label launched in October 2014 during Green Building Week. The label validated a real estate project’s compliance with new requirements in comfort, health and wellbeing at work. More than 10 million square metres of space around the world now boast this stamp of excellence.

Ivanhoé Cambridge, a global real estate industry leader, invests in high-quality properties and companies in select cities around the world with a long-term view to optimise risk-adjusted returns. Founded in Quebec in 1953, Ivanhoé Cambridge has built a vertically integrated business across Canada. Internationally, the company invests alongside key partners that are leaders in their respective markets.

Through subsidiaries and partnerships, Ivanhoé Cambridge has direct or indirect interests in over 160 million square feet (up to 15 million square metres) of office, retail and logistics properties as well as in more than 23,000 multi-residential units. Ivanhoé Cambridge held more than CAD 48 billion in total assets as at June 30, 2015. The Company is a real estate subsidiary of the Caisse de dépôt et placement du Québec, one of Canada's leading institutional fund managers.