London’s Oxford Circus to be transformed into pedestrian-friendly zones

Oxford Circus will be redesigned as two, pedestrian-friendly public squares.

Westminster City Council, the municipal author of the City of Westminster in London, recently announced a transformation plan for Oxford Circus. The junction will be converted into two, pedestrian-friendly piazzas that will be designed through an international design competition.

Work on Oxford Circus is slated to start later this year, with the delivery of the piazzas on Oxford Street targeted for the end of 2021. It will entail improvements to public spaces in and around the area for more leisure and recreational activities. Westminster City Council will be undertaking additional planting and seating, and will also work with Transport for London to enhance access to the Oxford Circus tube station.

So far, Westminster City Council has committed about USD 209 million to the project.

A GREENER AND SMARTER OXFORD CIRCUS

The transformation is aimed at reviving Oxford Street and the West End as a “world-leading, forward-facing, urban space” that is greener and smarter.

Westminster City Council announced that the RIBA International Design Competition will be launched in summer this year for the final scheme of the project. The Royal Institute of British Architects will be running the fully open global competition. 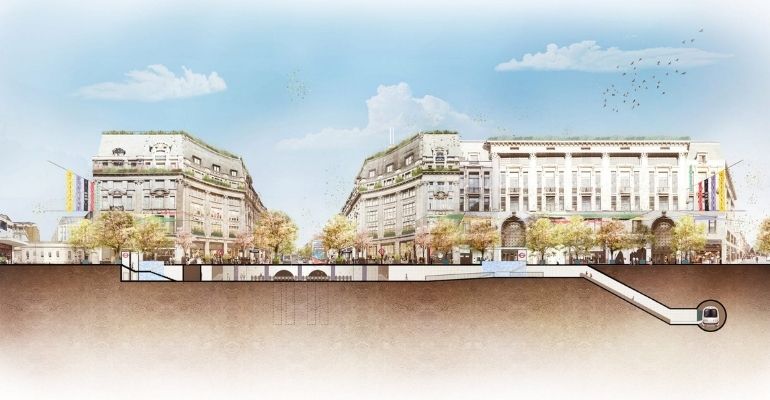 “There is an urgent need to tackle issues with pedestrian congestion and safety, poor air quality and noise. The serious congestion of Oxford Circus, of people and of traffic, is unsustainable and demands action,” Westminster City Council Leader Rachael Robathan said. “We hope the creation of these pedestrian-only piazzas at Oxford Circus will not only improve safety, security, accessibility but create an iconic destination at the heart of London.”

The move also looks to accommodate commuters who are likely to arrive at the district on account of the newly built Elizabeth Line. Traffic will be routed along Regent Street, across the north and south of Oxford Circus.

Overall, the transformation of Oxford Circus is aimed at managing pedestrian density, improving air quality, reducing vehicle traffic, and improving the network of buses and experience of cyclists across the area. It also takes into account changes in shopping and working patterns due to COVID-19, looking to create a hub for innovative retail, commercial and recreational activities.