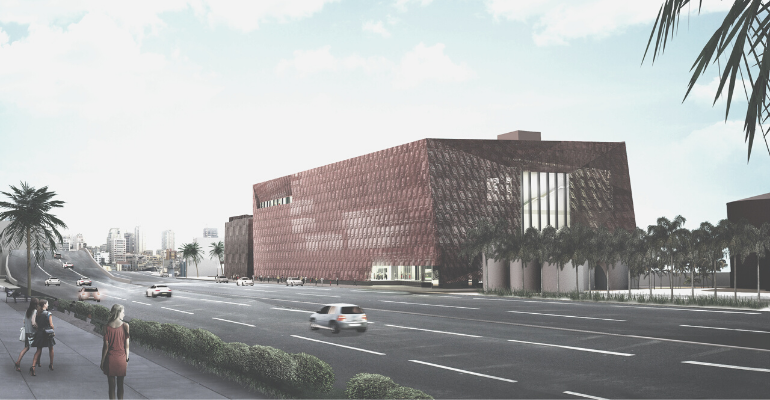 It’s not unusual for visitors to a major museum to end their visit at the gift shop to find a poster, calendar, or scarf to remind them of what they have seen. However, visitors to the Aïshti Foundation in Beirut are in for a different kind of experience.

In 1989 Lebanese businessman Tony Salamé opened the first Aïshti store in Beirut. By 1995 Aïshti was the country’s best-known domestic luxury brand with a downtown store surrounded by luxury international boutiques like Dior and Dolce & Gabbana. At the same time Salamé was developing a private art collection. Eventually, he decided to create a building that would be a gallery to house the collection as well as a boutique for luxury goods. Visitors could look at art first or clothes and accessories first or alternate among them in whatever order they might prefer.

To design the Foundation’s home, Salamé selected David Adjaye to whom Beirut was well known. "Having spent time in Beirut as a child, it is a pleasure to return to the city to work on this project,” said Adjaye before the official opening and also mentioned the challenge of uniting art and shopping.

The challenge of integration

The Aïshti Foundation opened in central Beirut at the end of October 2015 in a dramatic structure that replaced some unattractive old warehouses and overlooks a seaside promenade. “The juxtaposition of art and shopping presented the practice with the challenge to create a design for an entirely new typology that would integrate two, often conflicting, worlds,” wrote the architects in a press release.

To meet the challenge of integration, they decided “to establish a lively architectural dialogue – via a celebration of views into the different spaces (both gallery and retail) as well as a homogenising tiled design that presents a continuous language throughout the building’s floor, façade and roof.”

Shoppers coming to see the latest clothes and accessories may enter directly into the retail section. Visitors coming to see the art collection may enter directly into the art gallery. In order to unify the two, “doorways, screens and boundaries are therefore highly flexible, demountable, sliding and adaptable.” The main entrance at one corner of the building draws visitors inside who enjoy a view of the sea as they walk in, cancelling the impression of a busy street with noisy traffic on one side of the structure.

The exterior is uncomplicated with a twist, explain the architects. “The form is a simple block that has been rotated on one edge so that it appears tilted. The retail floors are to one side of the building, configured around a central atrium. The other side of the building accommodates the Aïshti Foundation galleries.”

The Foundation’s exterior appears different depending on where the observer stands. While the retail section of the building is wrapped in a solid façade and draws light from the atrium, the east façade is defined by a single large window, behind which a staircase ascends the galleries, offering a moment where the building connects back to the city.

With its red aluminium tubular structure applied to the building as an exoskeleton, the Aïshti Foundation façade - one of the most distinctive features of the architecture - envelops the edifice in a scrim of multiple layers and geometric patterns reminiscent of the mashrabiya, the perforated woodwork typical of traditional Arabic architecture.

The façade has a number of layers, so that the building is like a glazed box that sits within a louvered frame. The outer layer creates an efficient passive shading system. Laterally supported, it floats around the building, with a void existing between the two layers. The geometric ‘thunderbolt’ pattern of the ceramic louvres – or ‘baguettes’ – reappears in the landscaping across the entire site, as well as on the interior tiling and becomes a defining motif.

"After years of collecting and aspiring to someday give back to the Lebanese community," says Tony Salamé, "it's a dream come true to launch the Aïshti Foundation, with Massimiliano Gioni curating the opening show in a building designed by David Adjaye. When I went through the collection with Massimiliano in New York and saw everything coming together, it was quite an emotional moment."

"I am excited to be curating the inaugural show at the Aïshti Foundation," says exhibition organizer Gioni. "Tony is a dynamo and Beirut a city that has produced some of the most interesting artists at work today. I look forward to seeing the Aïshti Foundation amplify the energy and talent of many artists locally and internationally."

The Foundation’s art collection includes some 2,000 paintings, sculptures, drawings, video, and other new media formats. It is devoted to contemporary art and includes works from the year 2000 to the present by 300 artists. The focus is on living artists from East and West in order to promote cultural exchange and to expand knowledge of the arts among the general public in Lebanon and the greater Middle East while staying in touch with the most recent international scholarship.

With more than 4,000 square-metre of exhibition space, the Aïshti Foundation is located in a 35,000 square-metre complex that includes fashion boutiques, a curated bookshop, restaurants, cafes, a spa and a rooftop bar with striking views of Beirut framed by the sea.

As a new destination, the Foundation and its surroundings will inject new energy in the city of Beirut, which in recent years has attracted the attention of the international art community with its vibrant artistic scene and its rich cultural milieu. Although several major museums and galleries exist or are projected in Qatar and the United Arab Emirates, the Foundation is the first of its kind in the region to showcase a dynamic mix of contemporary artists and media on an unprecedented scale.