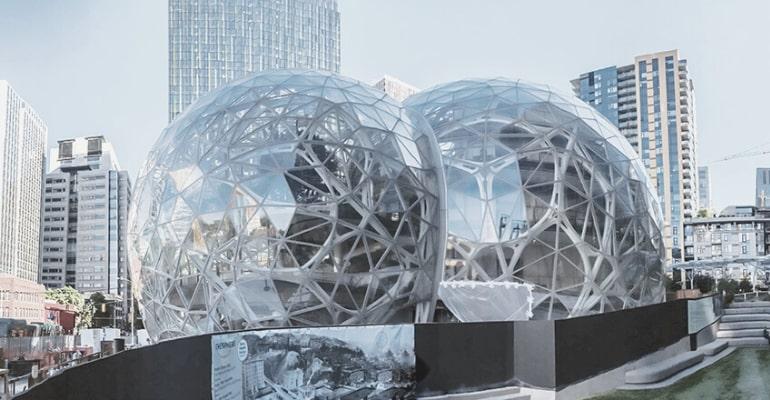 To increase the health and well-being of employees, architects are drawing on biophilia, a design-led approach that relies on nature, to revolutionise the workplace.

It’s no secret, the workplace is a stressful and demanding environment.

The majority of stress is often due to work pressures within a grey, dull and often windowless built environment – a factor which architects, designers and psychologists are trying to reverse.

Due to research into behavioural psychology and the neuroscience of work, architects are making a rapid departure away from generic suburban business parks in favour of futuristic green campuses, with sloping lawns, flowing streams and colourful meadows.

Studies have found that bringing in elements into a work environment that allow direct connection with nature (such as parks and lakes) or indirect connections (interior design using natural elements), can help alleviate stress in the workplace, restore calm and provide respite for employees.

Facebook, Google, Amazon, Apple and LinkedIn headquarters in the U.S., takes this a step further. These offices illustrate how the world’s tech giants are creating natural spaces in order to drive creativity, flexibility and even a bit of playfulness.

Architects are quick to point out that biophilia is not a trend or a passing fad, but it’s based on sound research that’s changing and revolutionising the workplace.

“This is a set of design principles inspired by nature, it’s not necessarily about being in the middle of nature but how we deal with these urban, stressful situations and how we reduce stress by looking to nature,” he adds.

Biophilia has grown substantially over the last decade, largely due to the rapid urbanisation of the modern world and heightened by skyscrapers.

The report found that workers in office environments with natural elements such as greenery and sunlight had a 15% higher level of well-being, were 6% more productive and 15% more creative compared to employees who were without these natural elements.

The results, says Heath, is indicative of employee happiness; when employees feel better they are more inclined to be more engaged and productive.

“The study also suggested that the top five things that people wanted in the office were; natural light, indoor plants quiet working spaces, views of water and bright colours. It suggests that people are recognising that natural elements are important,” says Heath.

With this research led-approach to design, it’s clear why architects are moving into this space and transforming traditional office design.

Nowhere is this more evident than in the tech field.

Take for example U.S. based NBBJ architects’ latest design for Amazon’s headquarters in Seattle. Known as the biosphere, the office is a jungle inspired greenhouse with glass orbs that are meant to pull Amazon workers out of their high-rise offices and into a workspace that’s embedded in nature.

From rope bridges and tree houses to streams and green walls, the NBBJ-designed biosphere includes thousands of plants which will be located inside the building, which will encourage employees to think creatively.

NBBJ are known for drawing on the biophilia approach within the workspace. For the new Amazon headquarters, they have designed the building in such a way that it maximises the amount of sunlight let in – a challenge in rainy Seattle – so that plant life inside the biospheres can thrive.

NBBJ computational design specialist Andrew Heumann, in an interview with Wired, claimed that a walk in nature can lesson brain fatigue. According to him, Amazon headquarters is the most biophilic workplace yet conceived.

Amazon is not the only company that’s adopting biophilic design, BIG founder Bjarke Ingels and Thomas Heatherwick from Heatherwick Studio are designing the headquarters for Google North Bayshore in California, which Ingels has stated will become a model for the workplace of the future.

The campus will have a huge nature and wildlife component, with plans to restore waterways and build meadows and creeks that connect to the San Francisco Bay. In addition, large translucent canopies will cover each site, controlling the climate inside yet letting in light and air.

It’s no different for Apple, Facebook and LinkedIn who are all racing for the title of ‘greenest building’ once completed.

From views of vast green landscapes, sun-scorched mountains and the option to take up volleyball, yoga, ping-pong, cycling or even tai chi, all during work hours; these tech giants, and the starchitects who are taking on these projects, have taken biophilic design to a whole new level.

For Heath, the tech movement is at the vanguard of workplace design because they are desperate to attract and retain the best talent. “They recognise that elements of nature such as playgrounds and various sport activities reduce stress. People feel more comfortable and relaxed when they are in this less stressed space and it is here when they can be more productive, without the fear of burning out,” he says.

While the majority of large offices around the world are unable to afford the lush green environments of the tech giants, Heath says biophlic design is not exclusive to the large corporates.

He says that architects and interior designers across the world, who stand by biophilic design, are introducing biomimicry, an approach that emulates nature's patterns, textures and colours into the office. It’s an idea, he says, that you can quite literally grow from the ground up.

Louise D'Costa Emanuelsen of Interface, the world’s largest manufacturer of modular carpet, says that they draw on the innate connection humans have to the earth, “our collections take cues from the visual, tactile textures found in the most elemental of floor coverings – forest floors, grassy fields and pebbled garden paths.”

For Emanuelsen an environment devoid of nature may create discord, “meaning that such environments can have a negative effect on health and well-being. It is noted that this discord is largely due to a lack of greenery and, in particular, a visual absence of plants,” she says.

Overwhelming evidence suggests that biophilic design should be implemented in every office for the benefit of the employee, while it may be a bit slow in catching on its time is rapidly approaching.

Heath succinctly sums it up; creating spaces that are very human centred, that uses nature to create a healthy, restorative environment will become a global design movement and revolutionise the workplace.