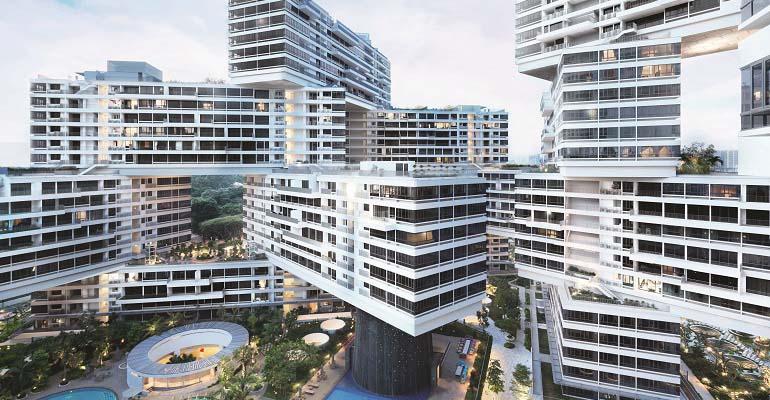 The Interlace building breaks away from Singapore’s traditional, isolated apartment towers and instead explores a dramatically different alternative that redefines urban planning.

Spanish architect Antoni Gaudí’s buildings in Barcelona established him as the most original, and somewhat unorthodox, European architect in the early years of the 20th century.

Gaudí carved a path for unconventional architects like himself and was known for his distinctive style following the world-famous Sagrada Familia and Casa Milà in Barcelona.

It’s hard not to draw on Gaudi’s work when looking at The Interlace, one of Singapore’s largest and most ambitious residential developments to date. Conceived as the antithesis of tower blocks, The Interlace has been described as a “blatant reversal of typology” by German architect Ole Scheeren, founder and Principal at Hong Kong-based firm Büro Ole Scheeren.

The building has garnered much interest for its unusual design after it was built in 2013. It was finally recognised for its creativity and unorthodox design in 2015, when it won the coveted World Building of the Year award at the World Architecture Festival (WAF) – widely considered the Oscars of the architecture world.

WAF Director Paul Finch puts it best: “The Interlace is blazing a trail with an example of bold, contemporary architectural thinking. The project presents an alternative way of thinking about developments which might otherwise become generic tower clusters.”

BIRTH OF A CONCEPT

For Scheeren, the project was born out of the question: “How can we live in a slightly different way?”

Scheeren looked beyond the conventional, vertical tower blocks in order to create a space that reinstated the notion of a community, while also retaining its privacy.

“We started the project in 2007 and during that time we found a postcard (of Singapore) from 1907 – exactly 100 years earlier – it was a fishing village. The quality of community was something our cities have largely lost. So, I asked how we can regenerate that at the scale of things we produce?” said Scheeren at a lecture he gave following his win of the Urban Habitat Award from the Council of Tall Buildings in 2014.

“So, the idea of the project was to topple the tower and throw the vertical over onto the horizontal, and stack a series of building blocks on top of each other with a fairly dramatic typography in itself, with views of the outside and the surrounding landscape and also inside the development,” said Scheeren.

One look at Singapore’s skyline and it’s impossible to fathom how a building of this shape fits into it, but for Scheeren, it’s all about the creation of urban space and shifting back to an era of communal living, which is why the building breaks away from the standard isolated, vertical apartment towers dominant in Singapore. For Scheeren it’s in a building such as this that community thrives.

Scheeren explains that Singapore, while a very beautiful city is filled with isolated, tall buildings, some of which are aesthetically pleasing and some that are not. For him, these buildings provide little, other than being singular, individual buildings – a pattern which he is trying to stay away from. “If you take the green away (from conventional buildings in Singapore) there’s a problem because there’s very little sense of space,” said Scheeren.

According to Scheeren, if they created a conventional residential complex, quality of life would be questionable as the towers would be too close together and offer little in terms of privacy.

“The system was simple,” said Scheeren, speaking about The Interlace. “Create a 70m long and six storey tall building and then stack it in a hexagonal grid. By doing this I doubled the distance between two opposing buildings.”

If Scheeren had created a vertical, isolated building the towers would be almost 30 metres apart but due to the hexagonal shape, the building is now 60 metres apart. The six-storey blocks are stacked up in twos, threes and fours, creating three peaks of 24 storeys.

As result of the hexagonal arrangement, each apartment has a variety of views and there is a sense of openness. “From an aerial point of view it’s not random at all…There are very large courtyards which have become the defining point of the project. Instead of residual space we created gardens in the centre of each community courtyard that were then programmed in various different ways to provide an identity,” said Scheeren.

The architects looked at quantifiable analysis on daylight control, solar radiation, wind movements, heat gains, solar exposure and then analysed which courtyard would get the most heat gain, so they could plan activities around these factors.

Residents can enjoy nature trails and restaurants. A continuous loop, which surrounds the site, provides a 1km running track and connects the courtyards to the activities around the edge of the site.

In addition, Scheeren created the complex to house extensive roof gardens, landscaped sky terraces and lush green areas on balconies to give the idea of space and tropical living.

Scheeren’s design has been somewhat of a breath of fresh air for the architecture of residential complexes. The architect has challenged the status quo of building design and has redefined urban planning, but only time will tell whether The Interlace will be seen as an innovative structure or a blemish on Singapore’s skyline.