Home>Architecture
Recent
What does the future of long-term design look like for architects?
Jul 08, 2020
Why the MENA Region could be the future of global logistics?
Jul 07, 2020
Top 3 Reasons Office Spaces or Workplaces Are Essential
Jul 06, 2020
Looking Beyond the Pandemic
Jul 05, 2020
POLL
Sketchbook Competition: Discover The Sketches Gallery
Jul 05, 2020
Why hand-drawing is a vital part of the architect's creative process?
Jul 02, 2020
UK Multifamily: Towns and cities with the highest future rental demand revealed
Jul 01, 2020
Top 3 reasons why we still need the office
Jun 30, 2020 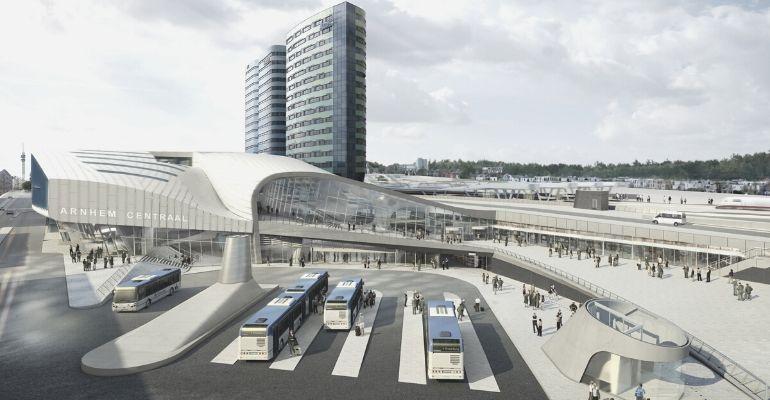 Arnhem Central Station in the Netherlands, a 20-year project in the making, has rewritten the rulebook on train station design.

Even though its futuristic and ultra-modern design seems a little out of place in the Dutch city of Arnhem – a town renowned for its parks, greenery and hilly terrain – Arnhem Central Station is being touted as anything but a station, instead it’s being pushed as the future of train travel.
A little over 20 years ago, Dutch firm UNStudio was tasked to develop a masterplan of the wider station area in what would become the largest post-war development in Arnhem. Two decades later, upon completion at the end of 2015, the Station has grabbed the attention of engineers and architects around Europe, not only for its complex and somewhat unorthodox design but also for rewriting the rulebook on train stations.
Ben van Berkel, founder and Principal Architect at Dutch based UNStudio explains it best: “Arnhem Central is no longer just a train station; it has become a transfer hub.”
A look at the Station’s modernist structure, made out of undulating glass and steel, is proof that it’s a fairly different structure than most of its type.

A UNIQUE WAY TO TRAVEL

When assigned the project, architects and engineers wanted to change the status-quo of station design and using Arnhem Central they came up with a unique idea, van Berkel told Cityscape Architecture.
Van Berkel and his team used the natural sloping landscape of Arnhem to create the terminal - which is a crucial transport link between Germany, the Netherlands and Belgium - with different functions with four storeys above ground and two below. At the centre of the masterplan is a transfer hall with an undulating roof form, which includes waiting areas for high-speed trains, trams and buses, and boasts an array of shops, restaurants, offices, conference centres and a cinema complex – concepts mostly unheard of within transfer hubs.
Van Berkel, who has a penchant for designing mammoth infrastructure projects, having also designed the iconic Erasmus Bridge in Rotterdam, says: “What’s unusual about the design is that we have created the Station in such a way that passengers never walk in one straight line from one terminal to another.” Instead, passengers are guided by curves as UNStudio eliminated the linear design found in most train stations.
After researching passenger flows and transportation modes, the team proposed that the new terminal should expand to become a ‘transfer machine’ that incorporates the whole spectrum of public transport, meeting the travel demands of the 21st century. Working with structural engineers Arup, a space without columns was produced. Van Berkel explains that early on in the design process a decision was made to eliminate columns or any structural obstacles blocking the view of commuters. The twisting structural roof geometry enables column-free spans of up to 60 metres high in the transfer hall.
The open space and lack of obstacles was motivated by a need to seamlessly integrate ceilings, walls and floors “so that visually this curved and twisted design guides you as a passenger and enables you to always look back from where you came from,” says van Berkel. As an added feature the terminal doesn’t have many signs, “because you can always see the route of where you need to walk to and passengers are guided by a particular spot of daylight coming above,” he says.

“I wanted to go back to the earlier motivations of travelling, create a design that celebrated the experience of travelling. It is at a transfer hub that the joy of entering or leaving the city is experienced. It’s about stepping into a new reality, it’s a bit of a dream and I was inspired by this,” says van Berkel.
Looking at earlier architectural icons that have succeeded at this, van Berkel lists New York’s Grand Central Station. For him the Big Apple’s train station is indicative of the celebration of leaving and entering a city, “symbolising an uplifting quality of travelling,” similar to the twisted curves created at Arnhem. It is these curves, waves and column free structures that evoke a celebration of travel, he says.
Adding to the overall theme of celebrating travel, the team decided to use certain material to illustrate it. Van Berkel decided to abandon traditional construction methods and materials and replaced concrete, originally intended for the station, with much lighter steel. In addition, the construction used boat building techniques rarely seen in building design due to its complexity.

CHALLENGES OF A 20-YEAR PROJECT

Van Berkel confessed that he was filled with relief once the two decade mammoth project reached its end. However, he says that the difficulty was not so much the 20-year time span but rather the fact there were many fragments that had to come together, comparing the project to a puzzle.
“It was such a long time that we were responsible for this project that we saw advisors and politicians come and go. And with these changes it was important for us to remain consistent and communicate the same agenda for the design. Although, I was quite happy to have worked with the same team who could actually remember where some of the files were kept,” says van Berkel.
The silver lining of such a long project, he admits “is that we have seen new and advanced techniques emerge over the last few years and this has helped us in successfully building a contemporary design.”

“Train stations have become the backyard of Europe,” van Berkel states candidly, explaining that historically stations have been placed on outskirts of European cities and are often seen as dilapidated. “However a lot of cities are rethinking this and hopefully we can see more renovation going into this.”
For van Berkel and many other architects who hold a passion for architecture within the transport industry, there is a need to elevate the state of train stations around Europe and the way to begin this is through renovation, investment and development around the station area.
Whether you’re a fan of the design or not Arnhem will become an example of how the development of a transfer hub can boost a city. For van Berkel it is evidence of the evolving role of architecture in train station design and its ability to shape a city economically. “Creating transfer hubs should go beyond pure infrastructural design and utilitarian expression. I hope the future of train station design can achieve this,” he concludes.

What does the future of long-term design look like for architects?
Jul 08, 2020

Why hand-drawing is a vital part of the architect's creative process?
Jul 02, 2020